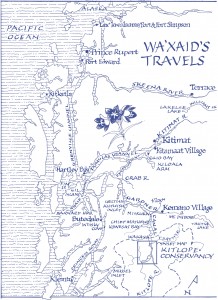 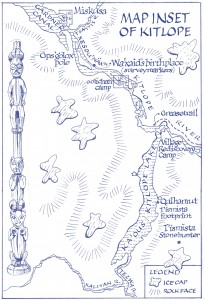 RMB recognizes the importance and need for all of us, as Canadians, to educate ourselves about past and current Indigenous issues, as well as to celebrate the beauty and diversity of this rich heritage. In honour of National Day for Truth and Reconciliation, we have prepared an excerpt from a book by one of North America’s most important Indigenous leaders, Cecil Paul. Please enjoy this excerpt from “Stories from the Magic Canoe of Wa’xaid”.

Excerpt from Stories from the Magic Canoe of Wa’xaid (RMB, 2019)

The Place of My Birth: “They call it the Kitlope”
My name is Wa’xaid, given to me by my people. Wa is “the river”; Xaid is “good” – good river. Sometimes the river is not good. I am a Xenaksiala; I am from the Killer Whale Clan. I would like to walk with you in Xenaksiala lands. Where I will take you is the place of my birth. They call it the Kitlope. It is called Xesdu’wäxw (Huschduwaschdu) for the “blue, milky, glacial water.” Our destination is what I would like to talk about, and a boat – I call it my Magic Canoe. It is a magical canoe because there is room for everyone who wants to come into it to paddle together. The currents against it are very strong, but I believe we can reach that destination, and this is the reason for our survival.

When you leave Kitamaat, this is Haisla Land, you go out to – they call it – Gardner Canal. You go into Gardner, and Crab River is where our boundary line was before the amalgamation of the Xenaksiala and the Haisla. Haisla and Xenaksiala share the same language, with a few word differences. Our language is close to the language family of River’s Inlet. You can get the Haisla history from Gordon Robinson.

When I bring the boat into Xenaksiala land, the tide will bring us through. There is a story for that. From Crab River we enter the Kitlope Valley. The Kitlope has many, many rooms, many doors – there is a lot of history going up to Kitlope Lake. Kitlope Lake, if we manage to journey that far, it is what I call the cathedral – a spiritual place. It is quiet. I think if you experience something when we get there, our people say that you will not leave that place unchanged. You cannot leave the way that you went in. Something touches you. Something grabs within you that you never identified as yours, but something in there reveals a little of who we are.
When we get to the Kitlope, I am going to ask you to wash your eyes. Our story says that though you may have 20/20 vision or glasses that improve your vision, we are still blind to lots of things. We are blind to Mother Earth. When you bathe your eyes in the artery of Mother Earth that is so pure, it will improve your vision to see things. I will also ask you to wash your ears, so you could hear what goes on around you. So, I could hear you talk. I could hear the wind, and you can hear the birds and animals. If you have the patience to listen, to hear the songs of the birds early in the morning, all these things will be open to you.

We are so busy, we don’t have the time for all these beautiful things. If you have the willingness and courage to do that, you will see little things that you have never seen before. You will take a better look at your children, your grandchildren, your best friend. You’ll say, “Oh, I never saw that before.” To get that vision back – and when you get that back – you will be more kind to whoever comes in your path on this journey. There are many legends that we talk about to our children, and above all, the people around the universe that came with their love and compassion to save something that is known around the world – the largest unlogged temperate rainforest in the world. 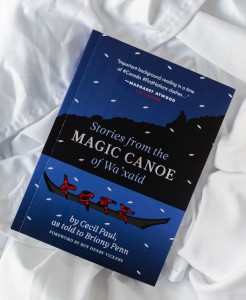 So Many Arrows Came Our Way
When they were mapping out the reservations, the government sent a guy out to tell the Haisla what their reservation is going to be. Our big chief told him, “Wa’wais” – the mountain tops where the first little stream starts from the mountain and comes down to our valley, to the hot spring. All the way down the channel as far as Butedale and all the way up to the headwaters of the Kitimat. As big chief, he knew all the boundary lands of different wa’wais, down the coast and further back. “That’s home. That’s all our place.” And the chiefs try to tell this guy [the surveyor], they ask: “Who was speaking for the Haisla?” And that guy didn’t listen. He wrote to the Indian Agent: “The Haisla had 35 acres,” and he described this village. “This place here, you can’t cultivate it. Couldn’t plant nothing, it’s all rocks. There’s a little stream coming down, that’s the one you cross and either side of the river is rows of wild crab apples, which the Indians like. Your obedient servant.”

That whole valley of people, the Haisla people with the oolichan fishing, only got a small little portion of Haisla land where they grew up, but that whole valley was Haisla. The chief ask: “What is this 35 acres of rocky soil? Concentration camp for Haisla people?” This was just a summer camp; they didn’t understand that. Kitlope was no different. That was when you start to mistrust. I’ve often wondered what would have happened if some guy had written back: “Nobody’s going to educate the Indian. We got a few crab apples. Your obedient servant.” There was a bad friction between the Indian Agent and the chiefs. They told him, “You can’t have that, that’s our home. Why are they putting this reservation there?” But our people didn’t know what was happening. They had a sense that these people were bad. There was an argument. And from Victoria, they had a war ship called Clio, which came and anchored there. Now it is Clio Bay. Was it to quiet the Natives down? I don’t really know.

Annie Paul, the queen of my family, 96 years old when she died. Her husband is Chief Johnny Paul, Chief Humzeed. My mother Clara, who holds the title of the great chief lady, which my brother Dan held, Chief G’psgolox. And that is her husband who is the Killer Whale Clan chief, Thomas Paul, my father. He was only 42 years old when he died of tuberculosis. Very young. My auntie, his sister, died too, only 40. My brother, Leonard – they talk about the Miller Bay Hospital – that is where my brother died in the TB hospital in Prince Rupert, only 20 years old.

A year and a half later, after he passed away, the miracle drug they called streptomycin came in. All the hospitals were filled with my people – Miller Bay, Coqualeetza, Nanaimo – all army and air force hospitals, were filled with Indian people with tuberculosis. Inside one year when streptomycin came in to hospitals, a miracle happened. Wish my brother had lived long enough to see the miracle happen. I praise society for coming up with something to penetrate that thing that tuberculosis has – the germ. No other drug would penetrate that to arrest what took my people.

Now only four of us left – four full-blooded Xenaksiala people. Three ladies: my little sisters Louisa and Vietta, and Lillian Henry, my cousin. Now, out of 700 or more, you’re sitting across from the only male left from Kitlope. Kemano cemetery is where I am going to be when I go to sleep. So many arrows came our way.

Grizzly Bear: He Holds Up Everything 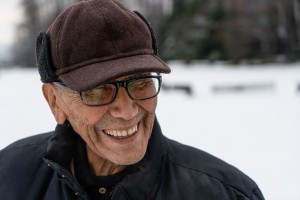 I brought three scientists up to see what I was shown by my Xenaksiala teachers. Grizzly bear, all kinds of grizzly bears and different colours: orange and yellow. They spot at age. Some of them are pitch black; some of them are light brown with white faces. It is very unusual. My people never touch a grizzly bear. They drilled into us when we were young, that he’s our friend in the bush. He is my brother; he is a guardian of the forest. All Xenaksialas hold this. The totem, you study the images of what is put down, and always at the bottom is the grizzly bear. He is strong; he holds up everything. What is on the top? The majority of the poles will have the eagle on top. The vision the eagle has is sharp. He’s guiding everything above, and you often see that in the Kitlope.

One day, a grizzly hunter guide comes looking for grizzlies, and I heard him say that he would shoot through the Indian children at the camp to kill a grizzly bear. I say to him, “These are not only Haisla children but children from around the world, and you threaten to shoot through the children?” I talked to him by the little creek, “Say to me please, ‘I’m sorry.’”
He said, “Wa’xaid, I’m sorry.”

But what is he sorry about? He didn’t elaborate on that word. Sorry to shoot through that child? Sorry because I met with him? Maybe because I didn’t accept the apology? I never met him again after that. We have a word for a type of grizzly that is angry or a killer; it is called gil dee spa.

Many Doors Opened for Wa’xaid
Many doors opened for Wa’xaid. In my journey, I think the beauty of it was – and I tell this to the children, and to Elders – I said, “I trust them, I trust them, and that’s where the trust begins. We’re going to save the Kitlope with a race I hated and distrusted.” 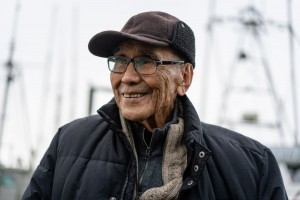 Cecil Paul, also known by his Xenaksiala name, Wa’xaid, was a respected elder, activist and orator, and one of the last fluent speakers of his people’s language. Cecil was born in 1931 in the Kitlope and raised on fishing, hunting, trapping and gathering. At the age of 10 he was torn from his family and placed in a residential school run by the United Church of Canada at Port Alberni, on Vancouver Island. For years, Cecil suffered from the pain of the abuse inflicted there. After three decades of prolonged alcohol abuse, he finally returned to the Kitlope and the positive influence of his people’s knowledge and ways. Once Cecil’s healing journey began, he eventually became an outspoken leader against the industrialization of his people’s land and traditional territory, working tirelessly to protect the Kitlope, the largest intact temperate rainforest watershed in the world. Cecil worked on two books with Briony Penn: Stories from the Magic Canoe of Wa’xaid and Following the Good River: The Life and Times of Wa’xaid. Cecil lived in his ancestors’ traditional territory and his work protecting the Kitlope continued throughout the final years of his life. Wa’xaid passed away at the age of 90 on December 3, 2020.

Wet’so’weten protests and calls for meaningful reconciliation continue to make headlines and it’s hard to ignore the feeling that we are being pushed and pulled into an increasingly divided Canada. What are the next steps? What is missing as we try to move towards reconciliation for a post-colonial Canada? RMB’s “Think Outside” podcast host Jillian van der Geest  sat down with Briony Penn and Cecelia Reekie to talk about Cecil Paul’s book Stories from the Magic Canoe of Wa’xaid his life, his legacy and how we can find the path towards reconciliation.